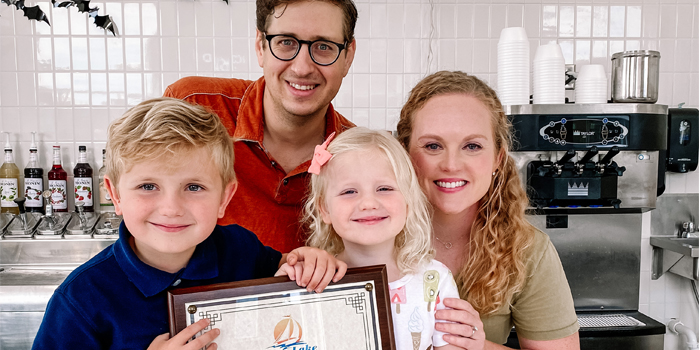 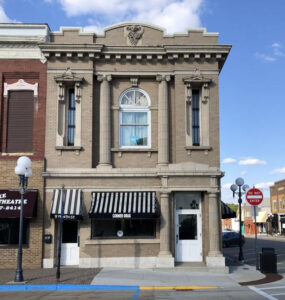 Passing up a big opportunity is not an option for Austin and Jessica Wood. So, when the idea arose to tackle a large-scale project on Main Ave, they felt compelled to take a chance to make their mark on downtown Clear Lake. When the dust of the renovations settled, Charlie’s Soda Fountain took its place to bring a bit of old fashioned fun back to the main street. With the hustle and bustle of customers coming and going from this brightly restored and renovated historical building, it’s hard to believe there was once a time it held nothing but the quiet swirl of dust in the sunlight.

The old Corner Drug store, last occupied by Thrifty White pharmacy, had been sitting vacant for a handful of years. Dust had collected on every surface as the once vibrant youth hangout and hotspot slowly deteriorated with each passing month it sat empty. Without any definite plans in the works for the large-scale project, Austin and Jessica purchased the building, going above and beyond the mindset of restoration and instead breathing brand new life into the space. With that new life came new retailers, and the opportunity to improve the economic footprint on Main Avenue.

Few people will remember the original occupants of the building, which was the Cerro Gordo County Bank. The Corner Drug store moved to that location in 1961, holding the space until it was sold to Thrifty White in 2004. The pharmacy operated there until a new location was built out on Hwy18 in 2015, leaving the downtown space vacant. “The building had been sitting empty for years and we just couldn’t stand to see such a great location not being utilized,” Jessica said.

Back in its heyday, the Corner Drug was the place to be for teens and young adults, delighting on the carbonated cocktails and ice cream concoctions of the times. In the basement, Floyd’s was the place to shoot pool and hang with the gang. The building had a long history and despite its closure, held an enduring place in the hearts and minds of Clear Lakers.

That’s why the Woods took on such a daunting project. “We currently own 2 AirBnbs, and have 28 long-term rental units in town,” Jessica said, “and we’re just sort of the ‘go for it’ type of people.” Even with the unknown factor of what they would actually do with the building, they went for it. “I like to say we’re kind of like serial entrepreneurs,” Jessica added with a laugh. The Corner Drug building wasn’t listed for sale, so the Wood’s actively pursued the owners, knowing the building had potential to be something magnificent again.

Upon completion of the final paperwork, Jessica made a simple post on social media, asking the community what they envisioned being in the building. While at first, they had no intention of using any of the space for their own business, they soon found the community opinions all leaned in the same direction. 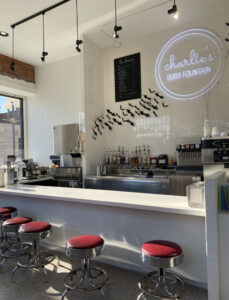 “I can’t say I’ve ever had big dreams of owning a soda fountain or ice cream shop, but there were so many comments stating that was what the community wanted,” Jessica said.  “So, we decided to do it.”

The social media coverage also sparked interest from local entrepreneurs who were looking for retail space of their own in Clear Lake. Jessica connected with White Barn Picket Fence, a photography studio and home/décor store, as well as the jewelry store, Ivy & Nash.  From there, they determined how the businesses could best utilize the space and catered the renovation project to suit everyone’s needs.

The Wood family worked long hours all summer long, doing the majority of the demolition themselves before hiring Dean Snyder Construction to come in with the framework and rebuild.  “My husband was here a lot of late nights this summer, sometimes even sleeping for a few hours before getting back to it bright and early,” she said. It was because of this hard work and dedication, the retail stores were able to open their doors in August of this year, marking a significant change in the retail footprint along Main Avenue.

Tackling their part of the building last, the Woods officially opened the doors to Charlie’s Soda Fountain in October, serving up all the classics from the old Thrifty White shop, while adding a bit of modern flair to the menu as well. You can order a “mud” which includes malt powder, nuts, and chocolate on top of ice cream, layered in a double pattern for pure awesomeness.  Or they offer soft serve ice cream, dip cones and various toppings to best suit your ice cream creation as you please. In the soda department, patrons can purchase old favorites like a Cherry Coke, or try an Italian concoction which has a soda base, added flavor, with cream on top.

All in all, it’s the perfect place to stop for a snack after school or a sweet escape over the weekend.

What’s in the future for the old Thrifty White building? The Wood family isn’t quite done yet. They were recently awarded a grant earmarked for the renovation of the upstairs units, turning the space into apartments. The Community Development Block Grant will help Jessica and Austin convert the unused second story into three apartments, adding much needed additional housing, enhancing the live-walk culture of downtown Clear Lake, and confirming their self-description of ‘serial entrepreneurs’.