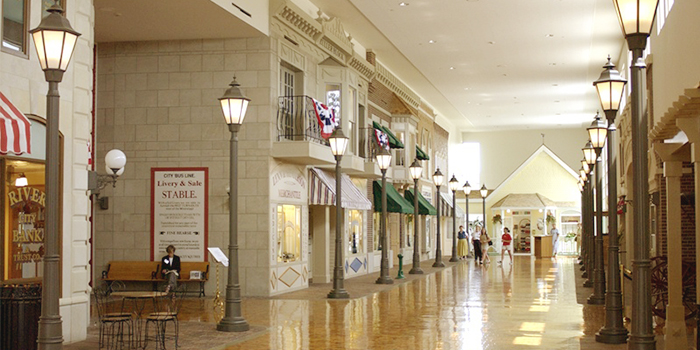 Mason City’s most famous native son set the stage for an enduring culture of music in North Iowa. 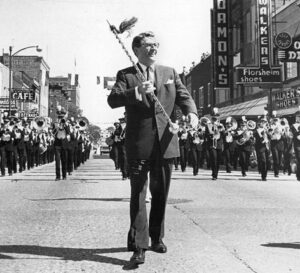 Meredith Willson, born in 1902, wrote “The Music Man” to celebrate life in his Iowa hometown as he remembered it as a 10-year-old. His musical opened on Broadway in 1957 and first came out as a movie in 1962. Its popularity will surge again with a new Broadway revival set to open in October 2020, starring Hugh Jackman and Sutton Foster. “‘The Music Man’ was written almost 60 years ago and yet it still draws crowds,” says Janice Rod, who works at Music Man Square, a public space celebrating Willson. “It’s still put on in schools, on Broadway, and in dinner theater. People love it.”

Willson also worked his way into Iowa’s music memory by writing school songs for Mason City, the University of Iowa, and Iowa State University. His diverse credits include the musical “The Unsinkable Molly Brown,” symphonies, and a Mass, though he wasn’t Catholic, according to Janice. Just as Mason City is proud of Meredith Willson, Mr. Willson was proud of his hometown. “It was a joke in Hollywood, to guess how far into a radio interview he’d go before he’d mention Mason City,” she says.

“Musical culture gives Mason City a different quality of life. There’s more available, for a city this size. The big summer thing here is the North Iowa Band Festival. People who aren’t even parents go to school band concerts. People with musical backgrounds come here because of this.”

Music Man Square includes a streetscape modeled after the 1912 scenes in the movie; a museum; conference rooms; an old-fashioned ice cream parlor; and a gift shop. Run by the Mason City Foundation with the help of volunteers, Music Man Square also offers tours of Willson’s restored boyhood home. More volunteers are always needed.

“When people come in the door and see the streetscape, they say it’s like stepping back in time,” Janice says. “You can sing in here, you can march in here. It’s a fun place.”

People rent space to give music lessons, concerts, and piano recitals. The River City Barbershop Chorus, another legacy of “The Music Man,” rehearses in the building. Music involvement is encouraged for the very young with the Kids Make Music program, and former amateur musicians play with the New Horizons Band.

Making Music for All Ages

Deb Nielsen, a professional music educator with degrees in music education and music therapy, leads Kids Make Music for ages one to eight years old. “Our focus is to teach the love of music,” she says. Children and parents can sign up for after-school classes held at Music Man Square. “It’s the perfect place to do this,” she says. “There’s a great big room for activities. Through grant writing, we have a dream set of instruments.” The sessions combine music with movement, academics (for instance, spelling songs), and monthly themes.

“‘The Music Man’ kind of put Mason City on the map,” Deb says. “We have an excellent music curriculum in our schools, both instrumental and vocal, and a lot of that success stems from the elementary schools. Here, kids get to experience music at an even younger age. Music is something you can do your entire life.” 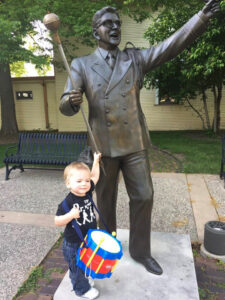 Willson started young himself, according to Janice. “He was determined to be a musician. They had to mail-order a flute for him.”

His real-life memories of learning music found their way into his famous play. “Before there was a high school band, he and his buddies used to get together and play,” Janice says. “The only song they could play reasonably and decently was the ‘Minuet in G.’ So there really was a boys’ band, and they really did play ‘Minuet in G.’ The whole show came from his memories.”

Once out of school, people sometimes chuck their instruments in a closet and forget about music. The New Horizons Band in Mason City invites people to dust off their horns.

Bernie Bjorklund started directing the band in 2004, after teaching in public schools for 36 years. “This is my 52nd year of directing. I was asked to start New Horizons here, and so I continue doing what I was doing, just working with a different age level.”

The band now has 64 members, ranging in age from 50 to mid-80s, though anyone is welcome. “Most of the people in the band had not touched their horn for 30 or 40 years,” he says. Several went to high school here, moved away, and came back in retirement.

The New Horizons program was started in 1991 by the Eastman School of Music. “Music has been proven, over and over, as working our minds,” Bernie says. “It gets people out of the house, and they meet others their age from different communities.”

The band rehearses 40 weeks a year and gives concerts at Music Man Square. “For people who like music, it’s a wonderful place.”

Sharon Olson, 81, started volunteering at the Meredith Willson House 20 years ago after her husband died. “Many of my friends were working on preserving it. I love old things. I’m an antique collector,” she says. But she’s been in love with the Queen Anne style house a lot longer. “I grew up in Mason City. As a baby, we moved here from Minnesota because my grandma lived here. I have memories of walking by the house when I was five years old. I loved the place itself.”

Sharon says, “Meredith Willson loved his roots. He came back. He loved his childhood here. A lot of people who are famous go out of the box and never come back. He had family still here.”

Willson’s boyhood home, built in 1895, opened as a museum in 1995 after extensive renovations. Sharon has given tours there to people from around the world.

“I also volunteer at the Community Kitchen. I want to give back to my town that gave so much to me growing up. We’ve got so much here to see and do. I can’t think of any other place I’d rather live. This is where your roots are. Don’t forget your roots.”