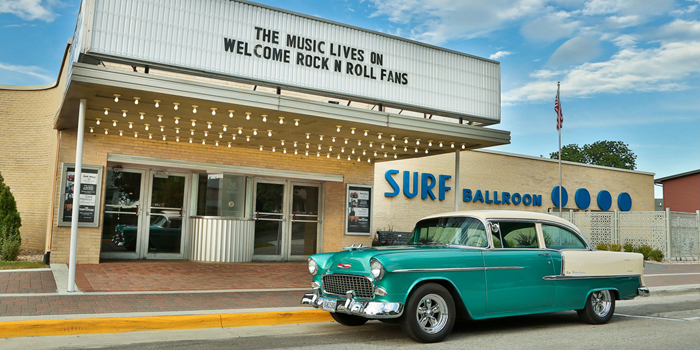 Where the Music Lives On

It’s a tale as old as time in North Iowa – or at least for the past sixty-one years.  What was scheduled to be a brief rock & roll tour of the Mid-Western United States soon became one of the most influential and iconic tragedies in the history of music. As the young musicians zig-zagged their way from venue to venue, the performers soon realized the closely-booked performances weren’t such a great idea.  Several degrees below zero, blistering cold temperatures, and dreadful freezing wind chills – all on a bus with a broken heater. Originally set for 24 appearances during January and February, tragedy struck mid-way through, after the group’s show at the Surf Ballroom in Clear Lake, Iowa.  Buddy Holly, J.P. “The Big Bopper” Richardson, and Ritchie Valens boarded a small aircraft to fly them from Mason City to their next show.

But the plane never made it.  The lives of the three musicians and the pilot lost forever after they crashed into a snow-covered field just north of Clear Lake, causing the history of rock & roll to be forever altered. 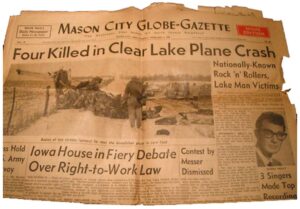 Many say Don McLean’s famous track, “American Pie” was written to pay homage to this tragic event, dubbing it The Day the Music Died. But rock & roll lives on in Clear Lake.  And just as other musicians pitched in to finish out the Winter Dance Party sixty years ago, we too, today, do what we can to keep their spirit alive.

In 1979, with the vision and help of on-air personality, The Mad Hatter, the Surf Ballroom began hosting a yearly tribute concert.  The Winter Dance Party is held each year.  Rock & roll enthusiasts, donning their poodle skirts and leather jackets, descended upon our great venue to remember, to honor; to celebrate the music, and to celebrate the lives and lost talent of our three fallen stars.

This show, this tribute concert, holds a special place for the people in this town.  Because February 3, 1959 may have been the day the music died for the rest of the World, but not in Clear Lake.

While the Surf Ballroom & Museum honors the three shining stars we lost that fateful night, they’ve done something remarkable in the process. Through dedication, commitment and the education of our youth, they haven’t let the music die.

Struggling in the early 1990s, the Surf faced an existing doom. Thankfully, local business owner Dean Snyder purchased and restored the venue. A love story for the record books, it’s been told Dean’s wife, Joanne, was his motivation behind the acquisition. Dean said, “If she liked to fish, I would have bought her a fishing pole, but she liked to dance, so I bought her the Surf.” 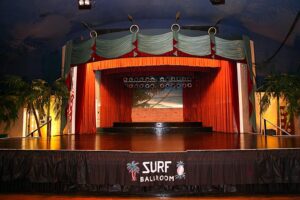 The Snyder family leased the Surf Ballroom to the North Iowa Cultural Center & Museum, whose main purpose is to preserve, maintain and manage the historic Surf Ballroom property as a center utilized to enhance the quality of life in the North Iowa area by providing cultural, education and entertainment opportunities. They’ve recently put those wheels into motion in a big way.

The Music Enrichment Center came to full fruition in 2019 with the purchase of the adjacent building near the Surf. It’s the perfect addition for the people of Clear Lake and our visitors. Its purpose is to share the story and history of the Surf Ballroom and will be instrumental in shaping young minds, educating them about our legacy and enhancing their ability to express themselves through music. This mecca of music education is a place to attract lovers of music, providing a centralized location where people, young and old, can gather to learn, practice, perform and enjoy music.

We will never forget the tragic events of that fateful February night in 1959. Forever etched in the hearts and minds of every Clear Laker, and of many people around the globe. A day we mourn those whose lives were lost. But here, inside the Surf Ballroom and the Music Enrichment Center, we celebrate. We celebrate the music. The memories. The rich history of Rock and Roll.

Because the music lives on in each of us.