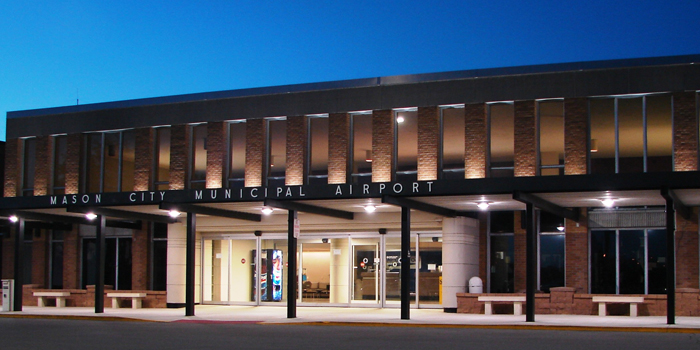 For the past 75 years, the Mason City Airport has seen countless planes come and go. Take offs, landings, fly-bys. Jets of every size, propeller planes, and leisure puddle jumpers. Some for commercial use, some carrying passengers on an adventure, and some simply flying for enjoyment.

Located just six miles west of downtown Mason City, the Municipal Airport is categorized as a non-primary commercial service airport. The airport sees traffic from all the major employers in North Iowa on a regular basis. In a survey of big business done years ago, it was discovered that proximity to a commercial airport ranked high on the list of priorities when deciding whether to open a store within a community. The business aspect, however, is only one part of the airport’s importance. Over the years, a variety of services have flown travelers out of Mason City connecting them to larger airports. With the recent addition of United Express, operated by SkyWest Airlines, the airport has seen a new influx of passengers taking advantage of the many perks of flying out of this local airfield.

The new service through United Airlines began on March 1, 2021, replacing the previous air carrier, Air Choice One. United offers twice daily service to Chicago O’Hare International Airport using a 50 seat Bombardier Regional Jet. With the connection to O’Hare, home to the United Airlines headquarters, a world of possibilities is opened for passengers. There, they can connect to flights all over the world. United has over 160 nonstop domestic and over 40 nonstop international destinations from Chicago. That means North Iowans now have access to over 200 destinations around the globe on a single ticket with seamless connections between flights.

To catch a roundtrip flight from Mason City to O’Hare, the cost for a ticket runs about $163 on average, which is closely comparable with the price to fly out of Des Moines – without the hassle of a two-hour drive, navigating through the city, and finding a place to park! This new service out of the Mason City Airport makes travel plans simple on all accounts, including the perk of free parking.

While the airport makes leisure travel easy for the residents of North Iowa, it’s also an economic powerhouse for the entire region. David Sims, Airport Manager, says, “The last economic impact data recorded is a bit dated, as it’s from 2009, but it was estimated the Airport created a boost for the community of about $11 million. Currently, the Iowa DOT Aviation Office is working on an updated summary which will be available in the future.”

We often say North Iowa is in the middle of everywhere, and this is part of why. While there are many Midwest destinations within driving distance, the convenient air service through the Mason City Municipal Airport provides economic opportunities for our businesses and entrepreneurs, as well as easy access for vacationing. We may be in the middle of everywhere, but we can get to just about anywhere from here.